Home > Stress & Your Health > What is Panic Disorder?

What is Panic Disorder? 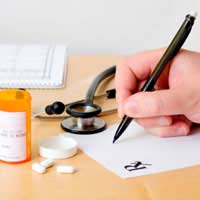 Panic disorder is the medical term from what most of us know as suffering from panic attacks. Research shows that one in seventy-five of us suffer from panic disorder, although doctors are unsure as to what actually causes the condition.

Panic disorder can manifest itself without warning on an individual in any circumstance. There are no clear indicators for the onslaught of a panic attack indeed it can happen at any time leaving the sufferer distraught and physically ill.

The symptoms of a panic attack are normally a combination of any of the following:

As mentioned previously the aforementioned symptoms can manifest themselves either singularly or as a clutch of symptoms, which will bring the sufferer to a stand-still.

Panic attacks fall under the umbrella of what psychologists called ‘Fight or Flight’ – a response that all human beings feel when in a situation that is dangerous. This can be typically a situation where an individual is at a great height and, although frightened, feels an overwhelming compulsion to jump. Again, although the reasons for panic disorder can not be explained, there are conditions that mark the onset of an attack.

These conditions often include feeling as though you are in mortal peril; the level of fear experienced far outweighs that of the actual situation and a sudden feeling of not being in control of one’s surroundings or emotions.

Sufferers of panic disorder may also experience the onset of certain phobias, bouts of depression, which can become almost manic if not treated, dependence on prescription medications and, in extreme conditions, suicidal tendencies.

Likewise sufferers of the condition may also find that it is brought about by possible ‘genetic inheritance’ whereby – in the case of twin siblings – both seem to suffer from the condition.

Stress does play a huge part in the condition and it has been noted that when sufferers of the illness are experiencing high levels of stress in their lives they are more prone to an attack than if they were relaxed and happy.

Many studies of the condition over the years have found many factors to be the same in the lives of those suffering from panic attacks.Normally these are:

Treating panic disorder is something that requires specialist help and although your G.P may well be able to identify and diagnose the condition (and this is reported to take longer than diagnosing other illnesses) they will invariably refer you to a therapist or psychologist who will then help you embark on a course of treatment which for the most part will not involve prescription medications.

Some extreme cases may however involve the prescribing of anti-depressants but in most cases a combination of cognitive therapy and relaxation techniques are employed to help alleviate the problem.Cognitive therapies are used as a means of identifying those symptoms that mean the start of a panic attack and/or triggers, such as particular thoughts and emotions or situations.

Relaxation techniques include controlled breathing exercises and what is called positive visualisation – a method of reducing the intensity of a panic attack by thinking of things not related to it.

In all cases however it is imperative that if you feel you are suffering – or could suffer – from the condition you should consult your doctor as soon as you can and also consider your marked changes to your lifestyle.